I believe the edge of gradient boosted tree models (GBT) over neural networks as the go-to tool for tabular data has eroded over the past few years. This is largely driven by more clever generic embedding methods that can be applied to arbitrary feature inputs, rather than more complex architectures such as transformers. I validate two simple one hot encoding based embeddings that reach parity with GBT on a non trivial spatial problem.

Tabular data is one of the few last machine learning strongholds where deep learning does not reign supreme. This is not due to lack of trying, as there have been multiple proposed architectures, maybe the most known being TabNet. What the field lacks though, are generic go-to implementations that would achieve competitive performance on a range of benchmarks, in a similar way as gradient boosted tree ensembles (XGBoost, LightGBM, Catboost - GBT for short) can do. Indeed, Shwartz-Ziv & Armon [4] show that the proposed tabular deep learning methods often outperform others only on the dataset proposed in their papers, generally losing to GBT methods.

Why should we care?

While the GBT vs DL debate can become emotionally loaded at times, there are some objective benefits to the latter approach:

I’ll use the NYC taxi trip duration dataset from Kaggle and try to predict trip_duration purely as a function of the pickup and dropoff coordinates. This exemplifies a relatively difficult type of tabular problem, as coordinates are numeric features, but we (a) expect to have a non-monotonic relationship between them and the target, with (b) potentially very fine-grained decision boundaries (imagine a city block which has exceptionally restrictive routing), and (c) the target is defined by the interaction of both inputs - trip duration is mostly a function of the distance between pickup and dropoff, so we’re expecting our models to learn this. Additionally, it’s a relevant real life problem for dispatching and logistics planning.

The regression models are trained for MAE, using early stopping. For the neural networks, learning rate reduction on reaching a plateau is applied. The holdout test set is split by timestamp, to avoid unexpected leakage.

The interaction-based coordinate problem does not really pose a problem for a GBT model. It can perform splits on the lat/lng space as it would on any other numeric feature. By alternating between splits on both pickup and dropoff, it encodes the interaction seamlessly. The only drawback of GBTs for this problem is that the binary splits can only be horizontal or vertical, and that you’d need 4 depth-wise splits to model a square (which in our problem can be relevant neighbourhood). It should be noted that there has been work to extend GBT to spatial splits, e.g. [3], but that’s not available to the lay practitioner.

The obvious argument speaking for models like XGBoost or LightGBM is how easy it is to get started with them and achieve competitive accuracy. Just look at the code below, you do not need to be a data scientist to run this!

where X_train is the DataFrame with the 4 coordinate columns. No feature engineering, no standardization or scaling, nor discretization is needed to get started! This is the closest you can come to not knowing anything about machine learning, but being able to train a model. We often (half-)joke with colleagues that the relative ease of using powerful libraries such as LightGBM has made the theory behind data science redundant.

I’ll use Keras for the following, to iterate fast over the relatively simple network architectures. First, let’s initiate a base class that simplifies training.

First, to prove what is probably obvious to people with DL experience, you can’t simply pass the complex numeric features into a fully connected layer. We’ll try with the following model, that passes the inputs directly to self.feedforward_layer. While MLPs are in theory universal function approximators, it’s inefficient to force them to learn the relevant “splits” from scalar inputs.

We can significantly help the model learn by discretizing the input data. A clever trick from [4] is to notice that a trained tree model can be expressed as a simple neural network where the inputs are one hot encoded according to which split in the sorted list of splits they fall into, the first layer of weights represents the connectivity of splits and terminal leaves, and the final output is simply the binary activation of one leaf node. Inspired by this, they propose to discretize the numeric features into bins based on quantiles, one hot encode these and only then pass to fully connected layers. I try this with the coordinate data - calculating the quantile threshold on the training set and applying one hot encoding based on them to the whole dataset.

Note that here all 4 coordinate inputs are embedded separately - implicitly we are assuming that the feedforward layer in the end is powerful enough to learn interaction effects from the concatenated embeddings vector.

Since a location is defined by 2 coordinates, perhaps embedding them separately is not optimal. A more natural discretization of space could be provided by a geospatial indexing system, such as H3. Similarly to [6] I calculate separate embeddings for H3 cell levels 4-10 (hexagon edge length from ~22.6km to ~66m). This is a useful trick, as there may be both high level and hyperlocal dynamics in the data. As the number of grid cells increases exponentially in levels, this does significantly increase the number of trainable parameters. [6] shows how hashing tricks can be used to combat this, but it’s not really needed for the current data, as NYC is relatively small.

There is a shortcoming of the embedded quantile bins method: it loses all information on the order of values. While this might not matter too much for our use case - coordinate range is not related to the target monotonically - it can help with more traditional numeric features, where you’d like to model both the ordinal properties, but also enable bin-level differences.

The source code for all models can be found here.

We see that both embedding-based models reach parity with fully trained GBT, which is what we were aiming for.

It’s interesting to visualize how the models “see” the coordinate space. For this, we can plot a 2-dimensional decision boundary on an arbitrarily framed binary classification problem - e.g. whether trip duration is going to be more than 5 minutes. For reference, both models achieve about 83% accuracy on this task. We’d expect different shapes of the decision boundaries, as GBT can only perform vertical and horizontal splits, while the embedded H3 model uses a combination of multi level hexagons.

The code below can be used to create the decision boundary, which can be visualized over a basemap, using the excellent mplleaflet library.

Fixing the pickup coordinates at the medians (which is somewhere around 5th Avenue and 42nd Street), we get the following decision boundary over dropoff coordinates for LightGBM: 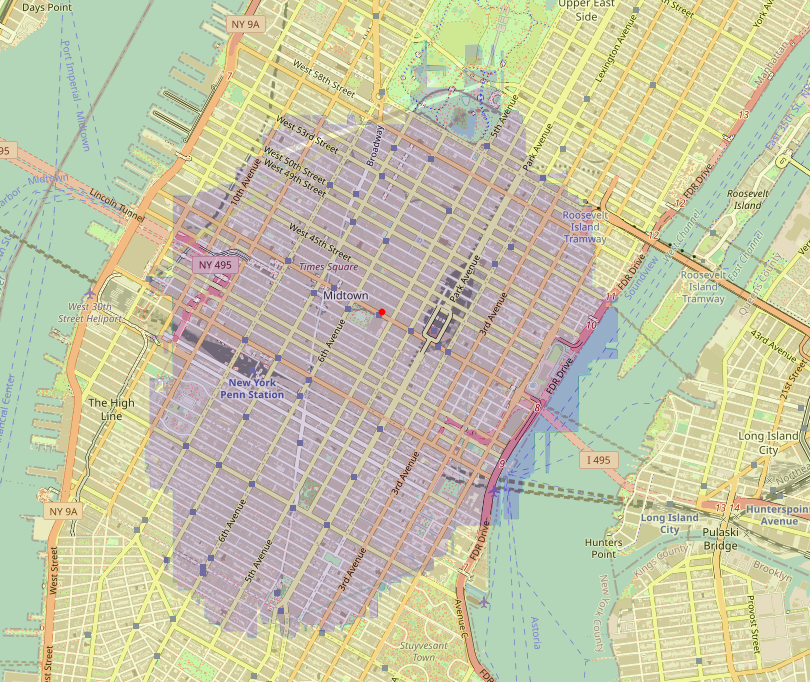 Here the blue region corresponds to where the model think we can reach driving in 5 minutes of driving, starting from the red point, an isochrone map. It’s significant that the model has learned such a realistic interpretation of the physical world - as travel time is mostly distance driven, it is intuitive that we’d see an area centered around the pickup point. Purely from the coordinate signal, the model has learned that this area is entirely homogenous, except near the border. This is quite remarkable, as generally for isochrone mapping you’d require a strong routing engine such as OSRM or Valhalla and an underlying road network graph.

We can sample arbitrary pickup points to make sure the good properties of the model are not caused simply from modelling the neighbourhood of the median well: 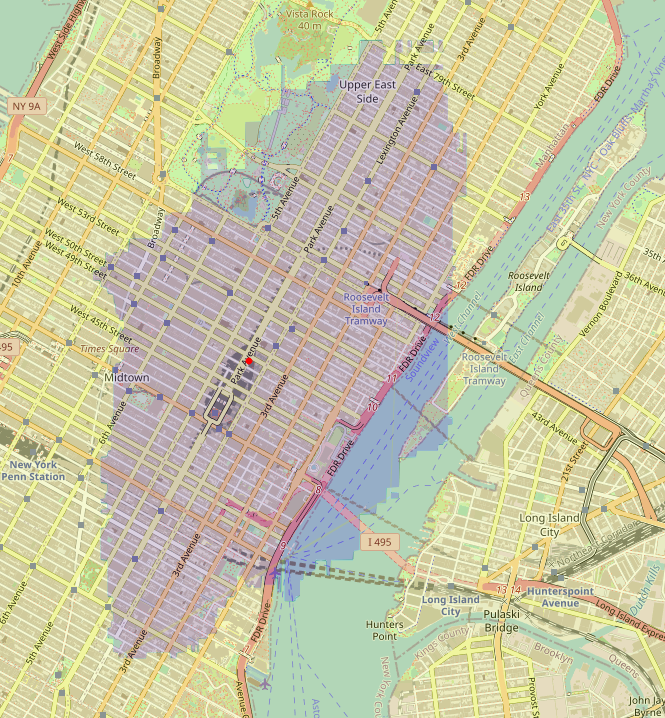 Here we see the model learning that driving towards Upper East Side on Park Avenue is faster than west-east, resulting in an oval-like isochrone.

And finally, we find a failure case: 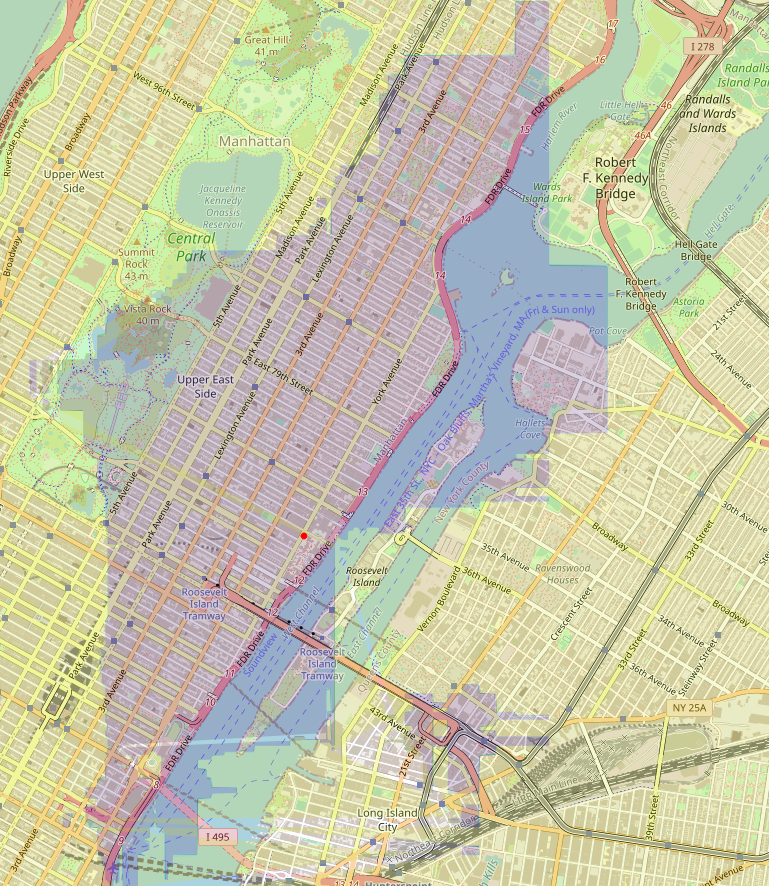 Here the model has correctly inferred that you can go over the bridge into Queens (and that area is blue), but we’d probably want it to understand that in this case the whole route to Queens should be blue. Most likely it’s caused by the fact that we don’t have a sufficient amount of trips with dropoff on the Queensboro bridge or near it :) We can also see that the horizontal-vertical split rule can look a bit clumsy.

The corresponding decision boundary around the median pickup for embedded H3 model looks like this: 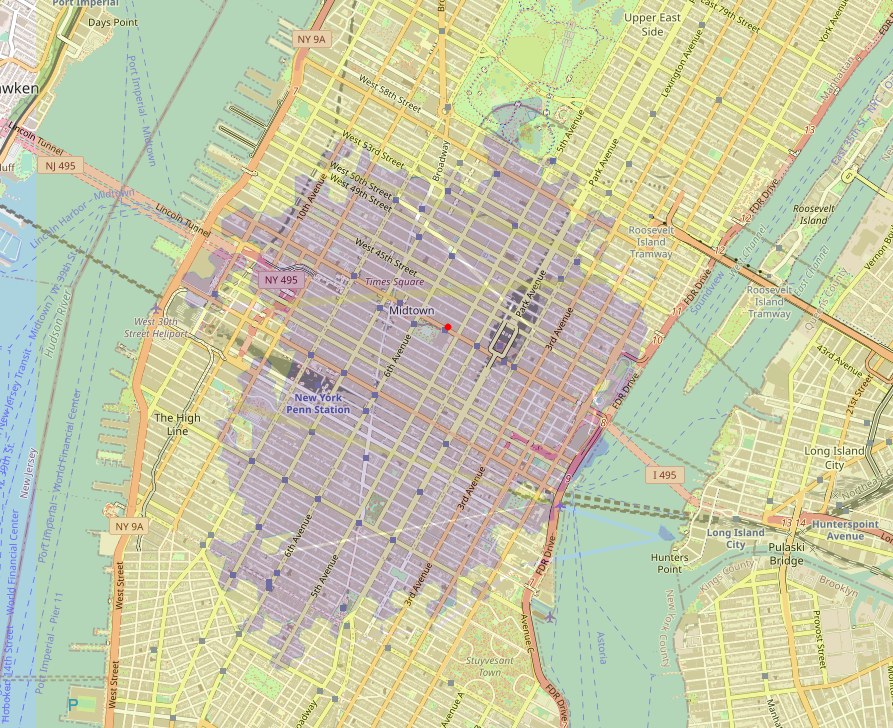 Indeed, the neural network model sees the map in hexagons, and we can recognize cell outlines straight away. Additionally, we see that the boundary looks less like a uniform blob we saw for the GBT, and capable of more complexity. This behaviour is intuitive, as GBT requires more splits to model exclusion (4 splits for square), while the H3 embedding based model can just turn any embedding’s key-value vector “on” to change the target prediction.

An interesting property of NYC the model seems to have learned - if I’m not overanalyzing this - is that getting to the area immediately behind (from the direction of the red point) Penn Station takes a longer time. As the busiest transportation facility in the Western Hemisphere, you’d certainly expect tough traffic there! With its horizontal/vertical splits and requiring multiple splits to model a neighbourhood, the GBT model has less incentive to capture this anomalous pocket and we see that on the GBT map there is no exception near Penn Station. 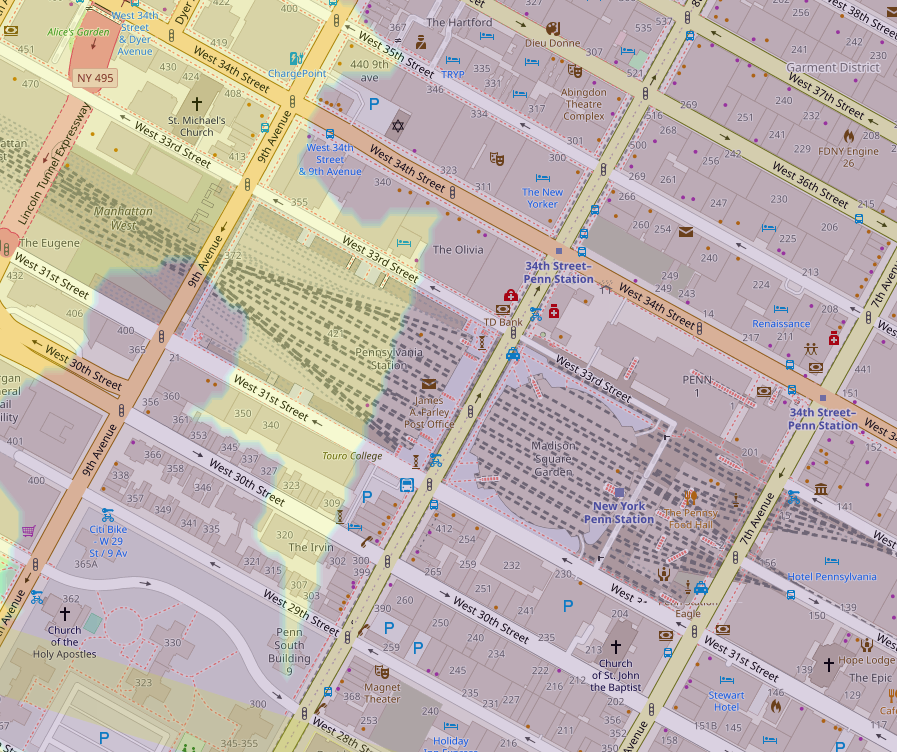 [3] How and why we built a custom gradient boosted-tree package, Lyft, 2021