Disclaimer: the following is some of combination of amateur economic history, Fermi estimates and general ramblings. It should in no case be considered to be anything similar to real research.

As I’m currently visiting Lisbon, I couldn’t help but notice the rich maritime history the city celebrates. Any way you look, there is evidence of the illustrious past of the Portuguese Empire, whether it be caravel themed Azulejo tiles, monuments to Prince Henry the Navigator or the splendor of the Praça do Comércio. And it is no wonder, as this was probably the zenith of Portugal’s “glory” by the standards of that era. Even across the whole world’s history, there are few examples of small countries achieving such levels of power projection as the Portuguese did. By the combination of some novel technical innovations and rather brute gunboat diplomacy, they managed to establish strongholds across the African coast and all around the Indian Ocean.

Portuguese discoveries 1415–1543; in green = in the Reign of D. João III, Wikimedia Commons

It’s well known that the Age of Exploration was mostly driven by the need to find alternative trade routes (of spices, mainly pepper, cinnamon, ginger, cloves) to Asia, as the existing land-based route was quite costly. Effectively, early explorers such as Columbus and da Gama were akin to budding entrepreneurs, who were looking to leverage venture capital (mostly the money of royal courts, but later also private markets with the advent of the Dutch East India Company and the likes) to finance their risky undertakings.

This made me wonder about how valuable the spice trade actually was, especially when put into the context of today’s consumer goods and corporations.

To start with, the best readily available online resource on in-depth analysis of historic spice prices was provided by professor John Munro (note how even he considered himself to be an amateur on the subject, despite being an economic historian… seems like a fun academic field).

Based on that, it took a master carpenter in Antwerp in 1438 (50 years before the Portuguese traverse the Cape of Good Hope), so about a half a day’s wage to buy 100 grams of black pepper, and one and a half day’s wage to buy the same amount of cloves. For reference, in 2019 the average net salary in Belgium was 2442 euros. Master carpenter is probably paid better than the average salary, so let’s assume 3000 net per month, or roughly 17.6 euros per hour assuming a 170 hour working month.

A mid range new iPhone costs about 850 euros, so (assuming 8 hour days) the average master carpenter in Belgium would need to work 6 days for an iPhone. In equivalent purchasing power parity terms, that’s the same as about 400 grams of clove in 1438! That puts into perspective why an individual Portuguese trader would be eager to get into the Indian Ocean trade routes. Ivan Obolensky makes the excellent point that due to the transaction cost of Age of Sail spice trade, the price markup from Goa to Venice was 27 times, while the modern cocaine markup is only 13 times. No wonder one of the suggested etymological roots for the word drug being the Middle Dutch droge for dry goods such as spices.

It’s also interesting to note that the sailors themselves were partly compensated with future pepper cargo. This could be considered similar to today’s equity options provided to tech workers. If you were willing to take part in the risky venture (according to Oliveira Martins, the ratio of safe return to being lost at sea was about 6:1) and if you did not start a mutiny or die on the way (as about one third to a half of the crew did even if the trip was successful), a sailor was awarded more than half a ton of pepper, or 436 iPhone equivalents (worth 370K iPhone equivalent EUR), in addition to the regular salary and chance at plunder. Those are odds that people might take up even today!

How much was the Portuguese spice trade worth?

I found some estimates on Wikipedia that claimed that in 1506, taxes on overseas activities accounted for 65% of the state income. Considering that the first overseas territory Ceuta was only conquered in 1415 and the Guinean Gold Coast reached in about 1470 (where the real profitability showed), that means roughly tripling the state income in 37 years between 1470 and 1506, or an annualised growth rate of 3%. That might not seem like a lot by today’s standards, but one needs to take into account that historical real economic growth rates are low, for example this study found that the pre 1660 real per capita GDP growth is zero, and only after the industrial revolution did we see a 1.25% pc growth (or 2-3% if we don’t account for population growth). That means that the Portuguese managed to kickstart something akin to the post Industrial Revolution level of growth, at least as far as their royal treasury was concerned.

Furthermore, we can estimate the annual revenue from the spice trade alone - the original question I hoped to answer with a quick Google search. There was a nice periodicity to Portuguese travel, as the ships made use of the monsoon winds to get back to Europe. Additionally, due to piracy, the ships had to travel in convoys consisting of more agile caravels and bulkier naus (an Iberian enhanced version of a carrack). As these were royal court sponsored convoys embarking from Lisbon, we have quite good records on them available. Moreover, we can take the 1606 shipwreck of a typical nau off the coast of Lisbon as an example of a ship in the armadas sent to India. This ship was carrying 250 tons of black pepper, and additional tons of various spices, so let’s round it to about 300 tons of pepper equivalent and assume that every nau was carrying such cargo on average.

PS: I later found this Wikipedia article putting the average cargo of a nau at 382 tonnes, which is not too far off my 300 tonne assumption.

There were 806 departures of naus to India between 1497 and 1612. That’s about 7 ships per year, but it’s an average over a time period that includes the very first voyages to discover the trade routes. Likely during the heyday of Portuguese domination (before 1590s competition from the English and Dutch) the number was somewhat higher, say 10 ships per year. For example, the exemplar 1606 nau was part of a fleet of six naus and four galleons. The galleons served as more maneuvarable fighting ships protecting the convoy. Let’s assume that this is an average fleet composition and that none of the galleons are carrying cargo. Using the universal currency of a labour day, one cargo ship was then carrying 300 tons of pepper equivalent, or 1.34 million days’ wages worth of pepper, or 223 thousand iPhones, worth 189 million euros today. For reference, a modern cargo ship carrying ~10 thousand containers at average value of $40,000 per container is carrying 400 million euros worth of goods, weighing about 240,000 tonnes. Given the value in labour and the value density of the Portuguese ships, no wonder they required significant protection! It might be that a Portuguese nau laden with peppers in 1510, waiting for the winter monsoon to start the journey home, was the valuable asset in the world economy at that point.

If we assume the perfect case where all 6 naus make it home that year, and using my suspect labour-to-iPhone-to-EUR conversion from above, this puts the annual current value of Portuguese India spice trade revenue just above 1.1B euros, which is only about 0.5% of the current GDP of Portugal. But that’s mostly just a reflection of how rich the world is today. Taking the estimated 1.2B GDP (1990 USD adjusted for inflation and converted to EUR) of Portugal in current euros at face value, we’d have an import-to-GDP ratio of almost 1, which would easily put exploration age Portugal among the top countries by trading activity in the world, and this is only considering the spice trade.

Finally, to estimate how much this foreign trade helped the GDP per capita growth in Portugal, rather than just the king’s personal budget, I refer to real economists who link roughly a fifth of GDP to the empire. But already the fact that you’d need a complicated model to estimate this shows that the spice trade was in no way a silver bullet raising Portugal’s wealth far above it’s neighbours, as plotting the GDP per capita growth against a few European countries clearly shows: 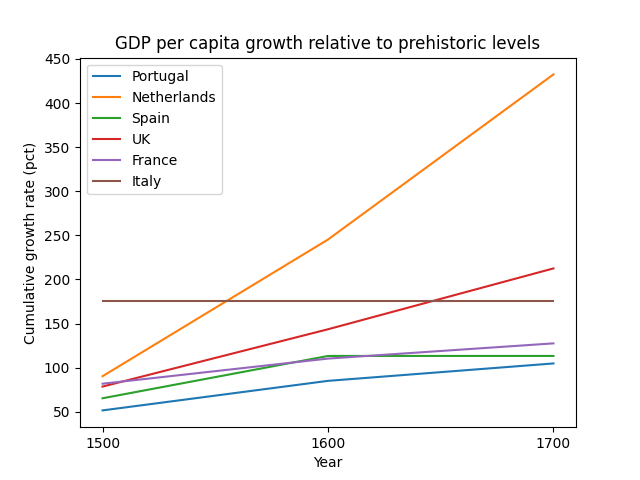 So far I’ve tried to estimate the size of the spice trade by revenue, but the attractiveness is determined by the profitability. Maintaning a multicontinental supply line to launch the ships, water and restock them, building a factory system to accumulate and store goods without blowing up the prices, and defending the cargo at all times is very expensive. It is telling that the Portuguese trading center in Antwerp went bankrupt already in 1549, decades before the Dutch and English started to contest the Cape Route, and the Lisbon based Casa da Índia followed in 1560. As a small country, Portugal seriously overextended itself trying to maintain market power in the spice trade, and had to rely on external financing and services.

It was the extensively private capital backed English East India Company and the Dutch VOC that managed to really dominate the Indian shipping routes and drive the Portuguese out with superior organisation and military might. Over the very long run, one might thus say that the spice trade was an example of a market with a second mover advantage, where being the innovator did not necessarily pay off in the end. As a matter of fact, the VOC went on to become the most valuable company in the world, and in many respects was the first congolomerate of the world.

To conclude, the value of the spice trade for Portugal was such that it greatly boosted the royal treasury up to a few times. It probably made some top merchants and royals incredibly wealthy during the good years. However, due to the volatile nature of the business and a lack of capital, the Portuguese were surpassed by foes with deeper pockets. The colonial enterprises were not enough to greatly enhance the economic prosperity of Portugal as a whole.

Some interesting points I discovered when reading up on this topic: